In the Footsteps of an Artist Family

At the Museum Haus Dix visitors can experience the everyday life of an artist family in the postwar period. Here, in the former studio and residential house overlooking Lake Constance lived the artist Otto Dix, together with his wife, Martha, and their three children from 1936 until his death, in 1969. A media guide leads visitors through the rooms with their histories, which remain fascinating today. The idyllic garden with its several terraces and the museum café invite you to linger.

From Dresden to Lake Constance

Born in Untermhaus (now a district of Gera), Otto Dix is considered one of the most important artists of the twentieth century and became a leading exponent of the New Objectivity in the 1920s. When the National Socialists came to power, in 1933, his work was denounced as degenerate. Dix also had to give up his professorship at the Dresden Academy of Fine Arts. But leaving the country was out of the question for him: "How could you emigrate when you have a stable full of pictures here? The Nazis would have come and confiscated everything. That would have been simply unacceptable!"

Instead, the family relocated to Randegg in 1933. In 1936 they moved into their newly built house in Hemmenhofen—in close proximity to the neutral Swiss shore. This break in Dix's life also had an impact on his artistic work. While his art had previously been characterized by subjects such as war and the metropolis, Dix increasingly devoted himself to the landscape around Lake Constance in his works.

"A beautiful paradise. Beautiful enough to make you puke. I’m standing in front of the landscape like a cow."
Otto Dix

Thanks to an inheritance, Martha Dix was able to acquire the property in what was even then a prime location. The spacious house was designed by the Dresden architect Arnulf Schelcher. Its characteristic features include the studio window on the east side, the wrap-around balcony, and numerous windows overlooking the lake.

The interior of the house is divided into three stories: the kitchen along with the living, dining, and music rooms are located on the ground floor. Otto Dix's studio and Martha Dix's salon are found on the second floor, and on the third floor are the rooms that belonged to the couple's children, Nelly (1923–1955), Ursus (1927–2002), and Jan Dix (1928–2019).

During guided tours visitors can also view the basement; its walls were painted by Dix and a few of his guests during a carnival party in 1966. The motifs show figures from the Alemannic carnival, or "Fastnacht," but also caricatures of friends and famous people. The wall paintings were long hidden behind bookshelves and first rediscovered in the course of extensive restoration work done in December 2012.

For the renovation of the house in accordance with monument-preservation specifications, a special type of reconstruction was developed that both recreates this historical site and brings the history of the era and its art to life. Paintings and graphics are presented in annually changing exhibitions. Reproductions on the walls stand in for works that once hung in the family’s living area and are now scattered around the world in museums and private collections. To convey the temporal distance from the present, the images appear as if they had left an imprint on the wall.

A media guide accompanies visitors through the house and the garden. It provides information on works of art and Dix family life and recounts personal anecdotes from Jan Dix.

The house and garden were registered in the monument registry of the State of Baden-Württemberg in 2005. In 2010 the Otto-Dix-Haus Foundation had the ensemble restored in accordance with monument-preservation standards and equipped for museum operation. In 2013 the foundation transferred it to the Kunstmuseum Stuttgart, which holds one of the world's leading collections of works by Dix. 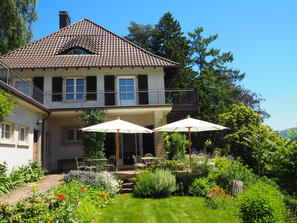 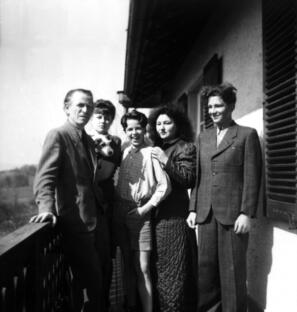 The Dix family on the balcony of their house

The Dix family on the balcony of their house 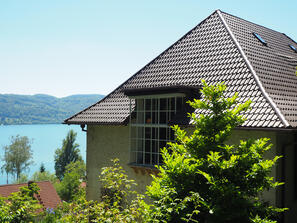 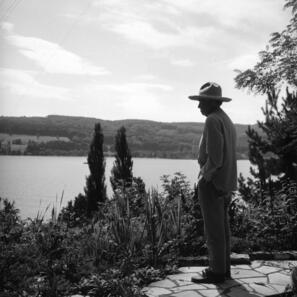 Otto Dix in front of his house in Hemmenhofen, 1961

Otto Dix in front of his house in Hemmenhofen, 1961 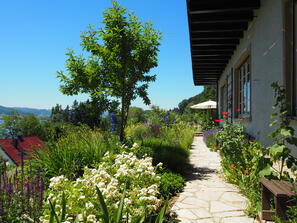 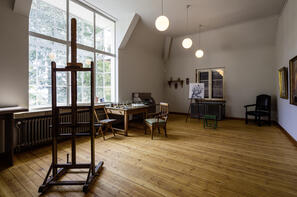 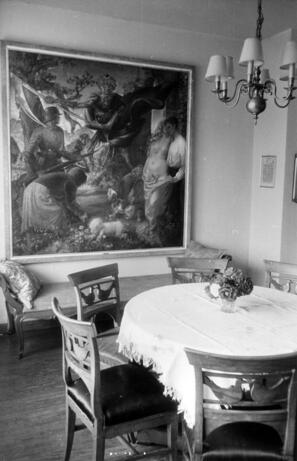 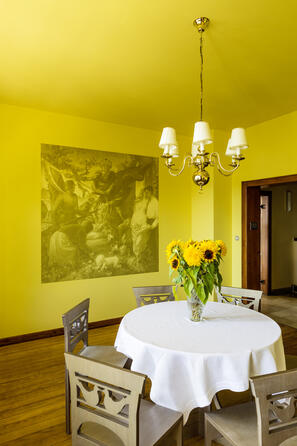 Dining room, with reproduction of Otto Dix's “Triumph of Death” (1934)

Dining room, with reproduction of Otto Dix's “Triumph of Death” (1934) 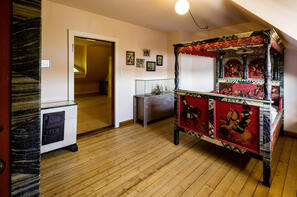 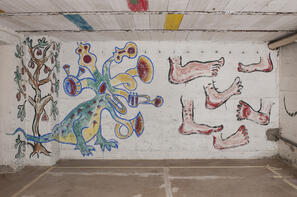 Wall paintings in the basement of the house

Wall paintings in the basement of the house
Exhibition 2022

The Gold and Silversmith Jan Dix

The 2022 presentation at Museum Haus Dix focuses at the creative work of Jan Dix (1928–2019), the youngest of the three children of Martha (1895–1985) and Otto Dix (1891–1969). Following his training as a jazz trumpeter, Jan Dix completed an apprenticeship as a gold and silversmith, which was succeeded by studies at the Academy of Fine Arts in Munich. He lived and worked in Öhningen until his death.

For his childhood home, today’s Museum Haus Dix, Jan Dix created the double-leaf iron gate at the entrance to the property as well as the handle of the front door in the shape of a lion. The exhibition presents selected pieces of jewelry and small sculptures by Jan Dix. Similar to his father, the son’s jewelry designs also reveal a tendency towards figurative, biblical and mythological narratives.